Further economic stimulus, continued vaccination progress, and overall positive sentiment contributed to a positive start to the year for stocks. Passage of the $1.9 trillion stimulus package and potential for significant infrastructure spending in the United States were certainly viewed in a positive light by investors. Vaccine deployment across the world ramped up quickly through the quarter, rising to an average of over 3 million doses being administered in the US per day and over 15 million doses per day globally.

In the equity markets the US generated the strongest gains with small capitalization stocks leading. International developed and emerging markets also posted positive gains, while modestly trailing US markets. As we look back over the past 12 months, the gains experienced are significant with many markets up over 50% and small cap value in the US up over 100% from the lows seen last March. While informative to see how strongly the markets have rebounded, it is important to keep perspective and remember these are measured from the lows and even just extending the time period to 13 months would meaningfully change the numbers.

Within fixed income, short-term interest rates remain near zero, with continued accommodative positions by the Federal Reserve and other global central banks. While the Federal Reserve indicates they remain committed to keeping short-term rates low, the overall direction of the markets and the economy has led to interest rates on intermediate and longer-term bonds moving up during the quarter, weighing on results for fixed income.

Stocks in the US gained 6.43% during the quarter and are up 62.75% over the last year. Over the past several years, there has been a wide divergence among equity styles, led by larger growth-oriented stocks. In the fourth quarter of last year, value and smaller-cap names began leading and continued their outperformance through the first quarter. After underperforming the broad market in 2020, REITs rebounded in the first quarter.

International stocks also gained during the quarter, appreciating 3.5% and 2.5% for developed and emerging markets, respectively. Again, one-year returns have meaningfully exceeded virtually everyone’s expectations as investors look forward to the opportunities beyond the current situation. 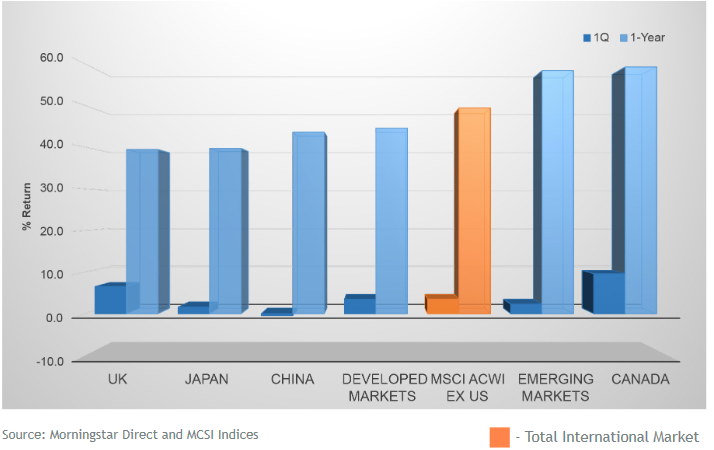 Returns within fixed income were generally down during the quarter as interest rates rose. Perhaps unsurprisingly, after performing very well during the flight to quality last March, Treasuries have been the weakest area over the last year. Hedged international bonds have provided diversification and benefit where held in portfolios as global yield curves have not moved in tandem with the US. Municipal bonds performed well on a relative basis and held up better than most taxable sectors during the quarter. 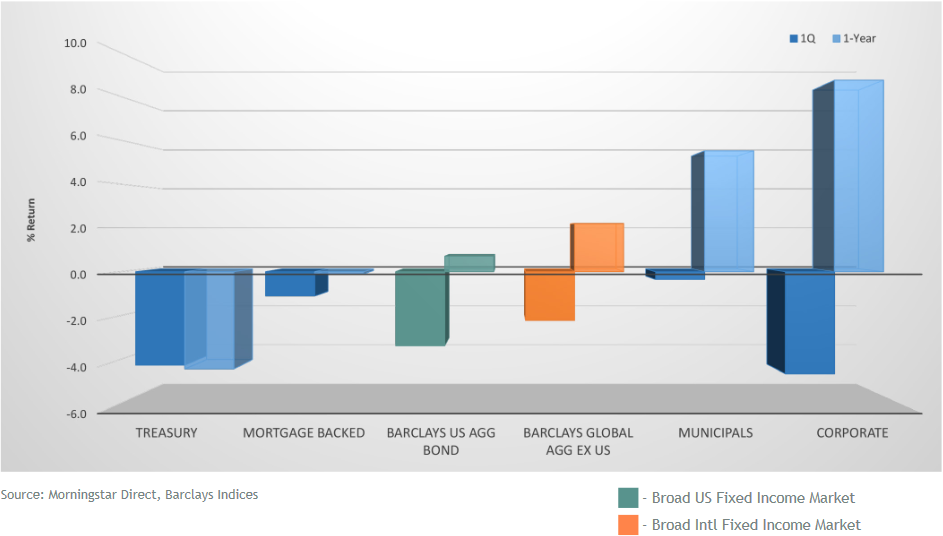 The S&P 500 Index is one of the most commonly cited and referenced indexes in the world. It appears on the front page of major news sites, in countless articles, and is a barometer than many use to gauge how the markets are doing. Yet, it is actually a fairly narrow definition of the markets. It represents the (approximately) 500 largest US stocks. Yet the global investable market is comprised of over 10,000 stocks. It includes small, mid, and large cap. It includes both the US and over 40 other developed and emerging markets countries. The global opportunity set also contains thousands of fixed income securities.

While most investors understand that their portfolios are structured and managed to their unique goals and objectives, and often bears little resemblance to the composition of the S&P 500, the sheer visibility of the S&P 500 makes it a common point of comparison, even if unintentional. The following chart helps illustrate the limitations that can come from using this as a point of comparison for an investor who holds a diversified portfolio. 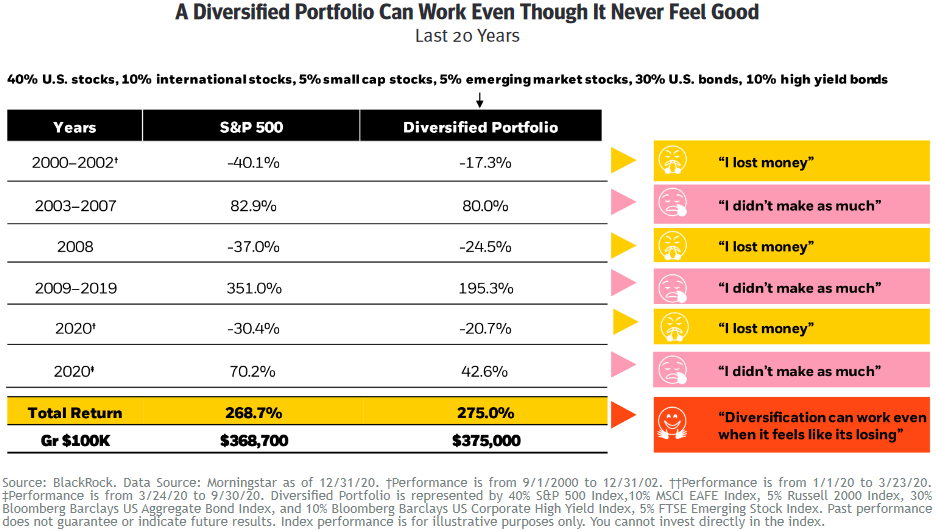 Over the last 20 years, there have been multiple up and down cycles. In down markets, an investor may feel like things are not going well because they are down (even if they haven’t lost as much as the S&P). Research has shown that investors tend to be more sensitive to the pain of losses in portfolios. Then in up markets, they may feel like they are losing out because their portfolio has not gained as much as the S&P. However, as BlackRock points out, even though it may never feel good being in a diversified portfolio, the end result over 20 years was similar but with meaningfully less volatility and risk taken.

Sign up to receive an email when new articles are posted.